The 99 beautiful names of Allah (God) as culled from The Koran have formed the basis and inspiration of my work The Beautiful Names set in Arabic.   It was composed in 2004.   The divine names fall into two categories those of majesty and those of mercy.   The 99 names are universal insofar as they are theophanies of the eternal primordial being.  A companion of the prophet Mohammed said “I never saw anything without seeing God”,  Man’s mission therefore is to join the outward to the inward.   This is the aspiration of The Beautiful Names and perhaps by doing this in the language of music one may contribute a little to the appalling strife that permeates the modern world.   The Beautiful Names came to me as a vision. I meditated on the individual names on an almost daily basis and the music seemed to come to me fully grown.   It was never random or chaotic but seemed to have the logic of cosmic music or the music of the spheres.

I regard The Beautiful Names highly and think of it as one of the most important of my works.   It was first performed in Westminster Cathedral in front of a large throng and in the presence of His Royal Highness The Prince of Wales who commissioned it and to whom it is dedicated.   It was later performed at a very moving occasion in Istanbul.   Critics noticed the unlikely influences of Beethoven and Elgar, which I can now hear after listening to it again. 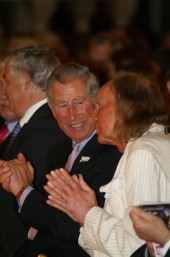