I wanted to write a highly stylised dramatic piece about the Egyptian prostitute saint, St Mary of Egypt.  I had just read Mother Thekla’s short book about her, and was very impressed.  I decided one day to ring her up and ask if she would be interested in providing a libretto.  I had no idea whether she was alive or dead, but to my delight she was both alive and interested.

This was the beginning of a wonderfully fruitful relationship.  On visiting her in Yorkshire in May 2011, aged 93, she remembered with great and characteristic clarity that first conversation, when she was brought in from feeding the goats to answer the telephone: “There’s someone called John Tavener on the phone for you Mother”.

Over a period of 20 years she provided numerous texts translated from the Russian, and became a kind of spiritual mother to me.  She died peacefully in August 2011. 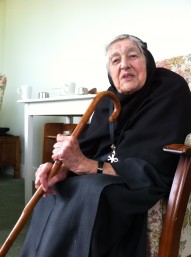 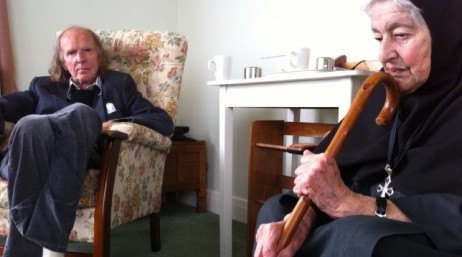 I should say straight away that I have never been interested in collaborating in the true sense of the word with anyone.  Rather I have needed people at different stages of my life to help me realise musical dramatic forms and ideas.

For instance, when Covent Garden asked me to write an Opera, I already know that I wanted to write about the inner crisis of faith and the dark night of the soul of St Therese of Liseux, but I had no idea of how to turn this into an Opera.  Gerrard McLarnon was suggested to me because he was a Russian Orthodox, rather wild, Irish playwright.  To begin with we were so far apart in artistic temperament that we needed Clive Wearing, the chorus master of the London Sinfonietta and a Westminster Cathedral lay-clerk to mediate between us on Therese.  Basically Clive provided the mystical text I needed from the Song of Songs, and Gerry turned the inner spiritual crisis into a wildly dramatic piece.  Gerry and I got to know each other through this experience and later worked on A Gentle Spirit and the Immurement of Antigone.