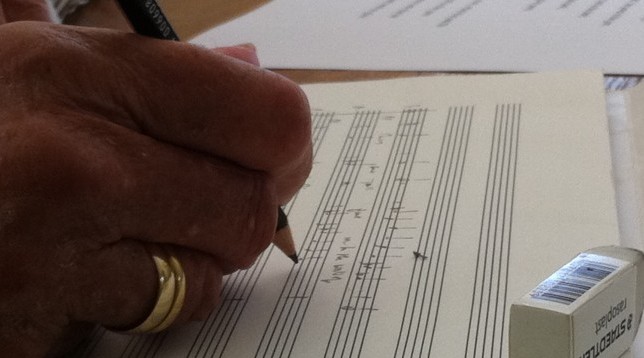 Tavener is a prolific composer.  A look through these lists of his compositions gives a fascinating glimpse at the breadth and depth of the inspiration and musical output.  All Tavener’s works are hand-written on manuscript paper, either in ink or pencil.  The paper is usually sized according to the number of staves he requires, from 12 to 36.  Tavener tends to date the scores as he finishes them, and note where they were composed.

Tavener has been exclusive to Chester Music throughout his career, so the works are well represented on the Chester Music website.  Scores can be bought from musicroom.com.

There are hundreds of recordings of Tavener’s works. Many are available from record shops and internet sources.  The record companies often have their own websites for Tavener, and there is a composer store at Amazon.

If a recording is not represented on this site, please contact us.

There have been several films about John Tavener over the decades – footage from the 60s through to the present day.

There are also, several books by and about Tavener.

Tavener is a compelling speaker.  Here are his thoughts on Mozart, Webern and Berkeley.

A quick look at the source material Tavener has used in his work, and a list of poets whose poems have inspired sung music. When setting text to music, Tavener is extraordinarily attentive to the meaning and shape of the words.