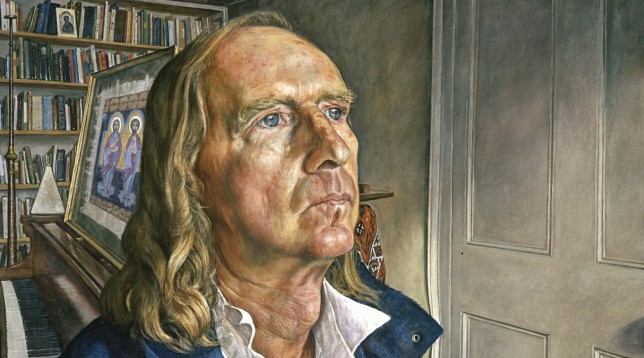 Early in his life Tavener was deeply influenced by the English metaphysical tradition in a work like the Donne Sonnets.  He explored modern techniques, religious texts and performance whilst being organist at St John’s Kensington, and went on to gain an early extensive reputation as a composer.   Read more

When asked why he writes music, Tavener answers that he wishes to transmit and make accessible to others an inner vision.  “I hope that my music resembles ‘icons in sound’, insofar as I see music as ‘a window of sound’ on to the divine world.”  He became Orthodox whilst still fulfilling his post at St John’s, and was immediately asked to make a setting of the liturgy in English.  This was the start of a long journey into Eastern Christianity.   Read more

Tavener’s long working relationship with Mother Thekla continued through the 90s while he began to write faster and faster. The impact of the Protecting Veil, a family life, and inspiration from around the world resulted in dozens of major works, including in a seven-hour all-night piece of music, The Veil of the Temple.  In this period he read widely and developed new techniques and ideas.   Read more

Following the outpouring of The Veil of the Temple, Tavener found the need to look further afield for inspiration.  While remaining firmly Orthodox, he broadened his field of vision.  This need for new material came at the same time as the shocking bombing of the World Trade Centre in New York.  The reaction this caused made him determined, as a Christian composer, to bridge the apparent divide and set texts from the Islamic world, as well as from other world religions.  “I felt an inner need to redress the balance”.   Read more