I returned to the text of the Requiem in 2006, this time as a universalist requiem, with lines from the Koran, Sufi texts, Hebrew texts and Hindu words from the Upanishads.  Like the much earlier Ultimos Ritos, I wanted the large forces to be spread out in cruciform pattern, with the solo cello in the centre.

The solo cello symbolises the Primordial Light which appears at death and journeys with us towards the state of oneness or paradise.  The score is headed with the words “Our true glory lies where we cease to exist”.

It was commissioned for the 2008 European Capital of Culture programme and first performed in Liverpool by the Royal Liverpool Philharmonic Orchestra and Choir under Vasily Petrenko.  I remember listening to the broadcast in intensive care in London. 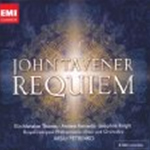