Ultimos Ritos is a huge meditation on the Crucifixion with large forces – four choirs, ten trumpets, four sets of timpani , trombones, flutes, recorders, oboes, percussion, harpsichord, chamber organ and large organ.   These forces are laid out in cruciform shape surrounding the audience with seven trumpets from on high, and the four sets of timpani at the four corners of the building.   The five movements are all based on the  Crucifixus from Bach’s Mass in B Minor.   In fact Ultimos Ritos is concerned with St. John of the Cross’s mystical concept of dying to oneself and this is achieved musically by allowing Bach’s music to gradually put my music to sleep so to speak as it finally does in the last movement Coplas and on the symbolic words ‘et sepultus est’ ‘and was buried’.   Ultimos Ritos begins with a black fortissimo chord where all the notes of the Bach Crucifixus sound together.   It was also inspired by St. John of the Cross’s famous drawing of the Crucifixion.   The second movement is concerned with a musical representation of the descent of the Eucharist using the instruments of love and royalty flutes, recorders, trumpets and trombones.   The middle movement is based on the mystical name of Jesus, repeated sung and called out in numerous languages reaching a pentecostal fervour at the climax.   Then the still ecstatic spiritual love poetry of St. John of the Cross is sung by the soprano solo in Spanish.   The fourth movement is purely instrumental and is a palindrome of the final movement Coplas.   Coplas gradually eclipses my own music and the final burst of the Bach closes the fifty or sixty minute meditation.I regard Ultimos Ritos as one of the pinnacles of my composing life.   It was first performed by the BBC singers and the Dutch Radio Orchestra conducted by Jon Pool as part of the Holland Festival in 1974.   It was broadcast simultaneously on BBC Radio and Television.   Ideally the work must be performed in a building with at least six seconds reverberation.   Ultimos Ritos “en honor del San Juan de la Cruz “ “in honour of St. John of the Cross”.   As St. John wrote in his poetry so the music attempts to reach the same mystical state, moving through suffering, darkness and light.  “ I remain lost in oblivion: My face I reclined on the Beloved; All ceased and I abandoned myself, leaving my cares forgotten among the lilies.” 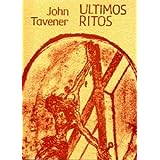