Father Malachy was a charismatic Carmelite monk who lived in the mediaeval castle  of Allington.   He had re-established the Carmelite order at Aylesford and I met him during the 60s.   I used to go and stay at the castle when I met Metropolitan Anthony, leader of the Russian Orthodox Church in England, as well as meeting visiting Hindu, Muslim and Buddhist leaders.

When Father Malachy died, I went to the Requiem Mass at Aylesford and I heard some notes which would form the basis of the Little Requiem.

Later I expanded the Little Requiem into the full setting of the Requiem Mass for the Kings Singers and the Nash Ensemble.   I worked with Clive Wearing on the plain chant and managed to weave the chant into the Requiem creating a fifty minute score.   I conducted many performances in England and Europe.

This is a snippet from the Little Requiem for Father Malachy 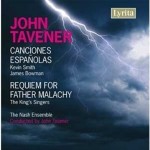