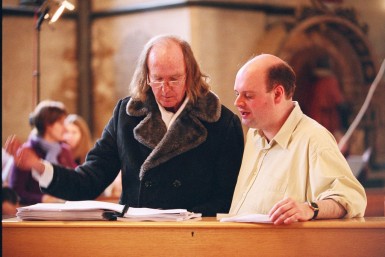 The music world paid tribute to Sir John Tavener on 11 June with a service of thanksgiving at Westminster Abbey, attended by The Prince of Wales. Sir John died on 12 November last year, aged 69.

Leading a service which mirrored the composer’s religious and personal leanings by including a gospel reading spoken and chanted in Greek, the Dean of Westminster, John Hall, was joined by Archbishop Gregorios of Thyateira and Great Britain.

An address was given by Sir Nicholas Kenyon, who said Tavener’s music was truly unique. Tavener was never a remote or theoretical composer, said Sir Nicholas, speaking about the ‘sense of paradox between the extrovert strength of John’s personality and the other-worldly nature of his music. Perhaps this was one secret of his success.’ He was not, as some imagined him, an anonymous medieval monk or a hermit writing religious music, ‘but an opinionated, hugely attractive late 20th-century personality. It was perhaps the tension between the extrovert personality and the inner vision that powered so much of what he wrote.’

Tavener’s music was celebrated with some superb performances. Counter-tenor Andrew Watts and oboist Nicholas Daniel presented The Hidden Face; Patricia Rozario sang Eternity’s Sunrise and Song of the Angel; and Steve Isserlis played Threnos. Stephen Layton conducted the Britten Sinfonia, which played ‘Mother of God, Here I stand’ from The Veil of the Temple.

Choral music was sung by the Choir of Westminster Abbey, conducted by James O’Donnell, and included They are all Gone into the World of Light; The Lamb; Funeral Ikos and a setting of The Lord’s Prayer.

A retiring collection was taken for the John Tavener Memorial Fund which is being set up to benefit creative and intellectual endeavours close to the composer’s heart.