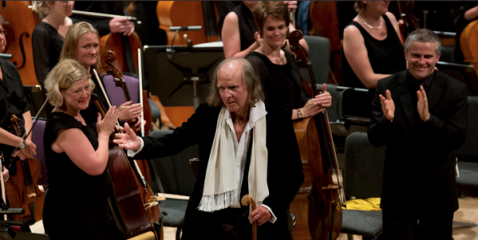 ‘Very occasionally a performance is so special that the audience feel reluctant to shatter the moment which hangs in the air between them and the musicians with something as profane as applause.’
THE INDEPENDENT

This sublime evening saw the premiere of three new pieces, composed by John Tavener, including one written especially for MIF’s Sacred Sounds Women’s Choir. Building on the legacy of Sacred Sites in 2011, MIF Creative invited women from faith communities across Greater Manchester to come together to explore the vocal and musical traditions of a range of different faiths, culminating in this performance at The Bridgewater Hall.

A transcendent duet by cellist Steven Isserlis and Sufi singer Abida
Parveen in Tavener’s Mahamatar was a fitting tribute to one of the
UK’s greatest composers.