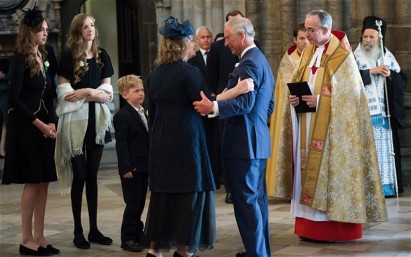 Prince of Wales at Thanksgiving Service for his friend, composer Sir John Tavener

The Prince of Wales paid tribute to one of Britain’s most celebrated composers as he attended a Service of Thanksgiving for the Life and Work of Sir John Tavener at Westminster Abbey.

The Prince, who attended the service alone in a private capacity, was warmly greeted by Sir John’s widow, Lady Tavener and also spoke to Sir John’s three children Theodora, Sofia and Orlando.

Clarence House sources said: “The Prince of Wales was a very close friend of Sir John and respected him hugely. He attended the service in a private capacity.”

A spokesman for Westminster Abbey added: “The Prince of Wales is known to have a personal interest in Sir John’s work.”

The service was conducted by the Dean of Westminster, the Very Reverend Dr John Hall and the address was given by Sir Nicholas Kenyon, managing director of the Barbican Centre.

Music by Sir John Tavener was performed before and during the service.

The Britten Sinfonia, conducted by Stephen Layton, performed The Hidden Face and the Choir of Westminster Abbey sang Sir John Tavener’s They Are All Gone Into The World Of Light, The Lamb and Funeral Ikos.

Sir John, who died aged 69 last November, was one of Britain’s leading composers of the past 50 years.

Fellow composer John Rutter said at the time that Sir John, known for his spiritual music, “was absolutely touched by genius at every point”.

In 1992 The Protecting Veil topped the classical charts for several months and in 1997 his Song For Athene was sung at the funeral of Princess Diana.

Sir John made his name with the avant-garde oratorio The Whale, which was released by The Beatles on their Apple label in 1968.

He went on to become one of the few contemporary composers to find wide acclaim beyond the classical world.

Sir John’s other well-known works included his setting of William Blake’s poem The Lamb and A New Beginning, which was chosen to see in the new century at the end of 1999 in the Millennium Dome in London.